Rocket Lab Opens Their Launch Complex 2 in the U.S.

Rocket Lab has officially opened Launch Complex 2, the company’s first U.S. launch site, and confirmed the inaugural mission from the site will be a dedicated flight for the U.S. Air Force. 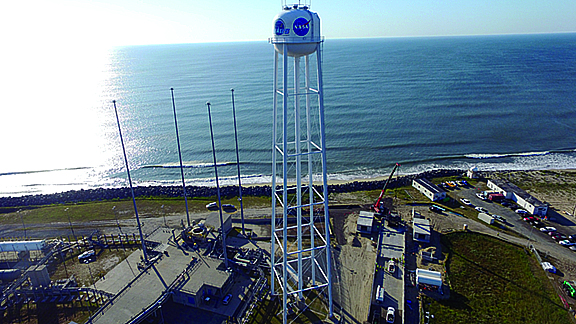 Located at the Mid-Atlantic Regional Spaceport on Wallops Island, Virginia, Rocket Lab Launch Complex 2 represents a new national launch capability for the United States. Construction on the site began in February of 2019, with the site completed and ready to support missions just 10 months later. Designed to support rapid call-up missions, Launch Complex 2 delivers responsive launch capability from home soil for U.S. government smallsats. The ability to deploy satellites to precise orbits in a matter of hours, not months or years, is increasingly important to ensure resilience in space.

At a press conference held at NASA Wallops Flight Facility, the U.S. Air Force’s Space Test Program has been announced as the first customer scheduled to launch on an Electron vehicle from Rocket Lab Launch Complex 2. The dedicated mission will see a single research and development micro-sat launched from the site in Q2 2020.

“It’s an honor and privilege to be launching a U.S. Air Force’s Space Test Program payload as the inaugural mission from Launch Complex 2. We’ve already successfully delivered STP payloads on Electron from Launch Complex 1, and we’re proud to be providing that same rapid, responsive, and tailored access to orbit from U.S. soil,” says Mr. Beck. “With the choice of two Rocket Lab launch sites offering more than 130 launch opportunities each year, our customers enjoy unmatched control over their launch schedule and orbital requirements. Rocket Lab has made frequent, reliable and responsive access to space the new normal for small satellites.”

“Rocket Lab’s launch site at the Mid Atlantic Regional Spaceport on Wallops Island, Virginia, strengthens the United States’ ability to provide responsive and reliable access to space.  We look forward to Rocket Lab successfully launching the STP-27RM mission from Launch Complex 2 next spring, which will test new capabilities that we will need in the future,” said Col. Robert Bongiovi, Director of the Air Force Space and Missile Systems Center’s Launch Enterprise.

Virginia Space CEO & Executive Director, Dale Nash, said, “The opening of Launch Complex 2 is a significant milestone and a remarkable achievement made possible by the strong partnership with Rocket Lab and NASA.  Almost immediately after Rocket Lab’s selection of MARS as its U.S. launch site; engineers, managers and technicians worked tirelessly together across multiple time zones and two continents to make LC-2 a reality.  Also, the strong support from the Commonwealth of Virginia and the Air Force, as well as the skilled contractor team have contributed greatly to this success.  We look forward to a busy manifest of Electron launches coming off LC-2.”

Rocket Lab’s VP of Launch, Shaun D’Mello, said the rapid pace of construction was made possible by the tireless support of teams from Virginia Space, which owns and operates MARS, and NASA Wallops Flight Facility. “The fact that we have an operational launch site less than a year after construction began is testament to the hard work and dedication of the Virginia Space and NASA teams, as well as the unwavering support of our local suppliers. Thank you for being a huge part of enabling us to open access to space. We’re excited to embark on the next phase of working together – regular and reliable Electron launches from the United States."