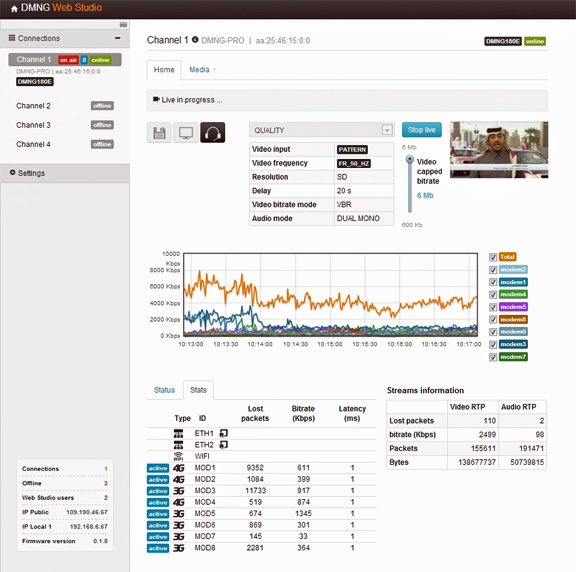 NEW: DMNG Studio—AVIWEST will showcase a new version of its DMNG Studio server at the 2015 NAB Show that is capable of receiving incoming streams from DMNG video uplink systems as well as third-party products such as IP cameras through a variety of protocols such as RTP, RTSP, TS over UDP, HLS, and RTMP. The new Linux®-based DMNG Studio supports multiple output formats and allows for point-to-point and point-to-multipoint video distribution. The new DMNG Studio system enables inputting video signals from the studio mixer and streaming to the cloud, thereby allowing broadcasters to use the solution as a central video hub and interface rather than just a receiver. The DMNG Studio is compatible with all AVIWEST live video transmission solutions, including the DMNG PRO series, DMNG RACK180, and the DMNG APP. Through the application's intuitive user interface, users can easily manage a fleet of remote transmitters and dynamically create live broadcast shows by interacting with remote journalists and selecting the stream to publish on air. The application is available in a variety of configurations to fit unique needs and head-end constraints. 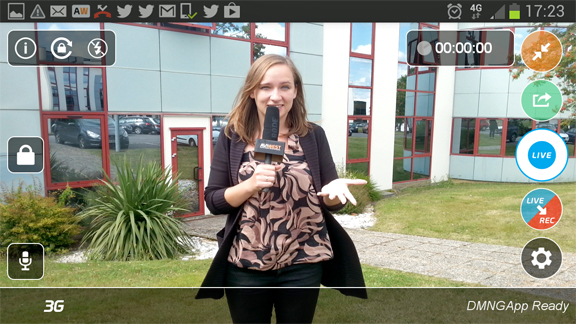 NEW: DMNG APP — Now Available for Android™ and iOS-Based Smartphones — A key highlight at the 2015 NAB Show will be AVIWEST's DMNG APP, which turns any smartphone into a live broadcast video camera. Designed with ease of use in mind, the DMNG APP allows any Android™ or iOS-based smartphone user to transmit video content in just seconds. Using the DMNG APP, video professionals can stream high-quality, live video content via WiFi and 3G/4G-LTE networks (even bonding both together for higher bandwidth, coverage, and reliability) or transmit prerecorded video files from anywhere in the world to the DMNG Studio receiver. Fully integrated into the DMNG ecosystem, the application can be remotely controlled through AVIWEST's DMNG Manager, enabling organizations to effectively manage a large fleet of smartphones.

NEW: Capabilities for DMNG PRO — Specially Designed Backpack — At the 2015 NAB Show, AVIWEST will launch a specially designed backpack for the DMNG PRO video uplink system. The backpack is ideal for broadcasters utilizing the DMNG PRO with a handheld camera. The DMNG PRO system can also be mounted on camera. Using the versatile backpack solution, which can be worn on the back or front, in-field news crew are able to carry all of the gear with ease.

In addition to general enhancement of system performance, several new functions have been added to the DMNG PRO system. A new roaming function supporting international SIM cards has been added allowing the user to select the operator that the SIM will be connected to, gaining increased flexibility. A new, low-frame-rate feature has also been added to the DMNG PRO, which is especially beneficial for low bit rate streaming. 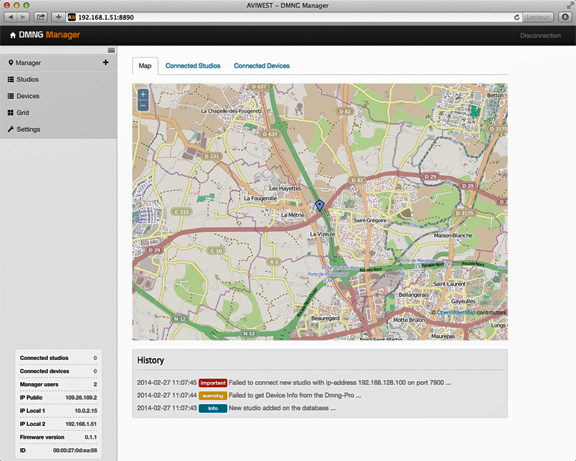 DMNG Manager — At the 2015 NAB Show, AVIWEST will demonstrate new cloud-based capabilities for the DMNG Manager, an innovative server application that enables broadcasters and video professionals to monitor and manage an entire fleet of DMNG equipment including DMNG transmitters, smartphones using the DMNG APP, and DMNG Studio receivers. Through a unified Web-based user interface, which can be installed through either a cloud-based application or a headend solution, operators can easily allocate resources and route live video content for transmission over 3G/4G cellular wireless, WiFi, Ethernet, and satellite networks. The DMNG Manager also includes geolocation capabilities for easy identification of the exact location of each transmission.

HEVC Demo — As the global consumer demand for high-quality live video continues to grow, broadcasters need efficient encoding technologies that provide exceptional video quality. At the 2015 NAB Show, AVIWEST will offer a booth demonstration of HEVC encoding and contribution technology capable of compressing video content based on the real-time characteristics of the various bonded networks, their bit rates, and delays to ensure a superior quality of experience.

Remote Production Demo — At the 2015 NAB Show, AVIWEST will demonstrate how the DMNG PRO video uplink system can remotely control a video mixer from a third-party vendor. The demo will feature six cameras feeding the video mixer. One DMNG PRO system will stream a video mosaic comprised of the six videos, and a second DMNG PRO unit will stream one of the six videos. The mixer will be controlled remotely from the receiving side, while giving the operator the capability to select the video to be received.

The AVI West infosite is accessible at http://www.aviwest.com/