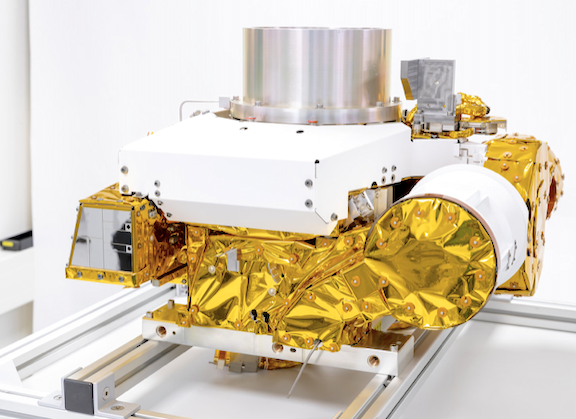 The successful launch of Eutelsat's KONNECT satellite was the result of many companies contributing their expertise. One of those companies was RUAG Space which produced mechanisms that point the satellite's electrical propulsion, which is a key element of this new type of all-electric satellite. The KONNECT satellite will provide broadband internet services to Africa.

The all-electric Eutelsat KONNECT spacecraft is the first satellite built on the new Spacebus Neo platform from Thales Alenia Space, and these electric engines consume significantly less fuel than chemical engines. The electric propulsion is necessary to bring the satellite exactly into its position and to maintain this position over the lifetime of several years. In total RUAG Space developed and produced 12 mechanisms at its site in Vienna, Austria.

Peter Guggenbach, Executive Vice President RUAG Space. said that to have designed and produced such a complex mechanism in a very short time frame is an extraordinary technical achievement. Their mechanisms are a key element of this new type of all-electric satellite.

The EPPM is able to accommodate and point 5 kW plasma thrusters with its associated electrical harness and propellant feed lines. It was carefully designed to minimize mass, isolate the thruster mechanical launch loads, manage orbital temperature extremes and deliver exact pointing accuracy over a 15-year service lifetime. For the Eutelsat satellite RUAG Space also delivered the central tube, the “backbone” of the satellite, and slip rings.

The new Spacebus Neo product line is developed in the frame of ESA's Advanced Research in Telecommunications Systems (ARTES) program, in cooperation with space agencies from ESA Member States, and managed jointly by ESA and the French space agency CNES. The Neosat program comprises both Spacebus Neo by Thales Alenia Space and Eurostar Neo by Airbus Defence and Space, and includes development up to in-orbit validation of the new satellite product lines for both companies, allowing European industry to deliver competitive satellites for the commercial satellite market.

Additionally, the payload fairing and the onboard computer for the Ariane 5 rocket was produced by RUAG Space.