[SatNews] On April 3, 2014, shortly after 11:00 p.m., Sentinel-1A, a polar-orbiting satellite, was launched successfully on a Soyuz rocket from Europe’s Spaceport Kourou in French Guiana. 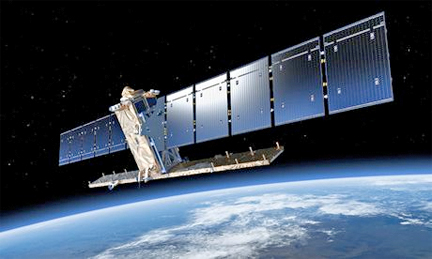 Artistic rendition of the Sentinel-1A satellite.

Sentinel-1A is the first satellite of the ESA Sentinel fleet, that has been developed specifically to provide large amounts of data and pictures for the Earth observation program Copernicus. Sentinel-1A will orbit the Earth at an altitude of a few hundred kilometers (in a low Earth orbit) and will provide all-weather, day and night radar imagery for land and ocean services.

The laser communications terminal on board Sentinel-1A is another component of the European Data Relay System (EDRS) and enables high-speed data transfers between the low Earth orbit and the geostationary Earth orbit. The first high-volume data connection between the laser communications terminal on Sentinel-1A and a satellite in geostationary Earth orbit is expected to be realized later this year.

The Berliner Glas Group infosite is located at http://www.berlinerglas.com/home