The rocket's 7,500 lb thrust engine performed flawlessly, propelling the 1200 lb rocket to Mach 1+ within seconds over the FAR Launch Area. The 30-foot long CPM TV rocket is a boiler-plate test version of the identical rocket units that will make up Interorbital's modular orbital launch systems. 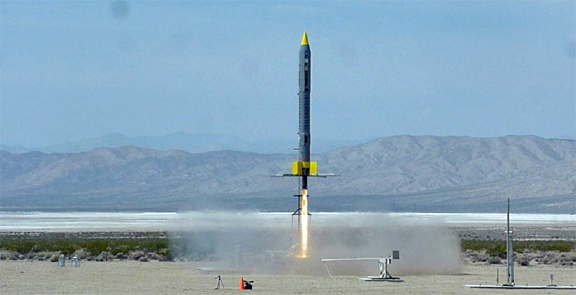 This unguided, fin-stabilized version of the CPM TV was controlled at the beginning of the launch by a unique cable guidance system that uses guide-arms attached to the bottom edge of the fins. Cables attached to the guide arms are wound around pulleys and a common drum, allowing the cables to unwind at the same rate, keeping the rocket flying straight until the fins become effective. This launch system is a low-mass equivalent of a 180-foot launch rail. The pyrotechnic guide-arm release system, which worked perfectly, is identical to the stage-release system that will be used by the IOS NEPTUNE orbital launch systems.

A standard CPM is designed to burn its hypergolic liquid propellants (nitric acid and turpentine) for up to 150 seconds, which is enough to carry a 320-pound (145-kg) payload on a suborbital flight to an altitude of 192-miles (310-km). Because of the maximum altitude restrictions at the launch site, the burn time had to be limited to 10 seconds and ballast had to be added to the rocket to increase its weight. Due to a center of pressure anomaly, the rocket reached 10,000 feet, which was about half of its predicted altitude. The rocket's health and recovery system adapted to the problem and returned the rocket and its payloads safely to the ground.

The following commercial payloads were on-board:

All payloads were recovered still functioning and intact. The rocket sustained minimal damage and will be re-used on the next test flight in which the CPM will be finless and guided. Systems Tested: Propulsion System in flight; Cable Launch Device (CLD) and Pyrotechnic Staging System (PSS); Telemetry; Health and Recovery System; Wireless-encrypted CPM controller.

The Interorbital Systems infosite is located at.