On Saturday, SpaceX CEO Elon Musk revealed the 60 satellites his company will be launching this week — the first batch of thousands of satellites that SpaceX hopes to deploy in the years ahead to provide global internet coverage from space. Musk tweeted a picture of the satellites packed tight together inside the nosecone of the Falcon 9 rocket that will take the spacecraft to orbit.

The satellites are the first operational units of SpaceX’s Starlink initiative, a planned mega-constellation of nearly 12,000 spacecraft that will sit in a low orbit above Earth and beam internet connectivity to the surface below. The Federal Communications Commission has granted SpaceX permission to launch two groups of satellites for the Starlink project: one constellation of 4,409 satellites, followed by a second constellation of 7,518 that will operate at a slightly lower altitude than the first. Together, the satellites are meant to fly in a synchronized dance over the Earth, providing internet to every region of the planet. 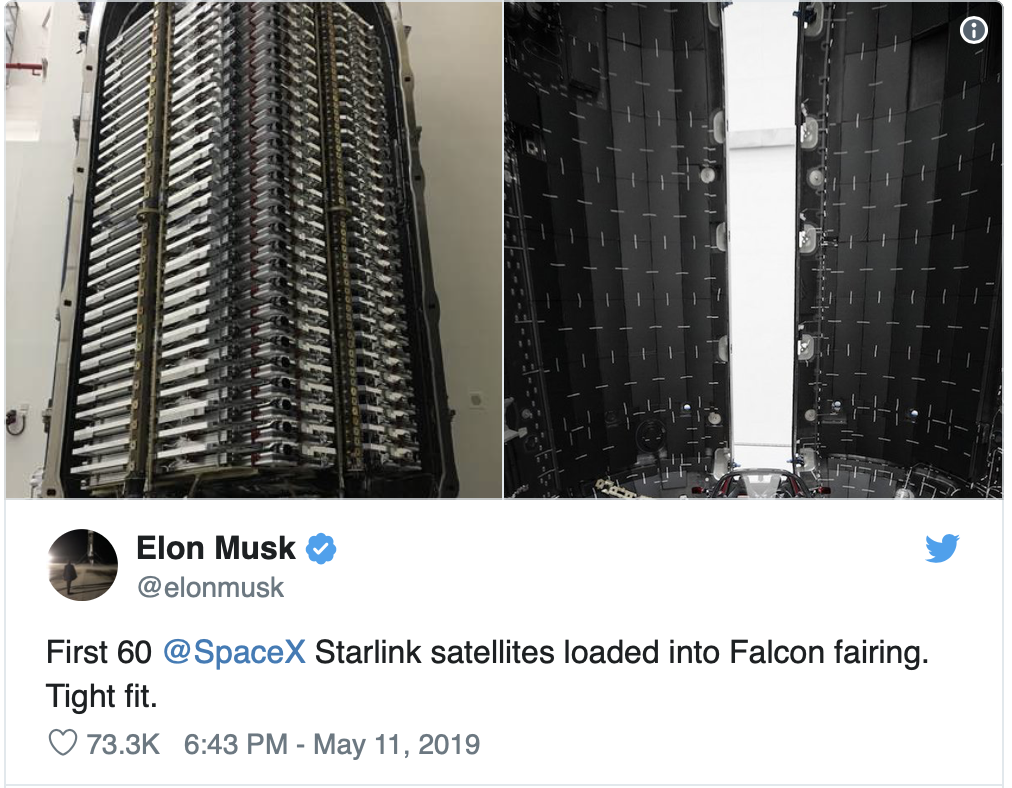 SpaceX’s FCC approvals are contingent on the company being able to launch half of all these satellites within the next six years. So far, SpaceX has only launched two test Starlink satellites, nicknamed TinTin A and TinTin B, which flew to space in February of 2018. The duo seemed to perform well, according to Musk and SpaceX investors, though the company did end up keeping the satellites in a lower orbit than originally planned. As a result, SpaceX successfully petitioned the FCC to fly some of its satellites in the lower orbit, based on what the company had learned from those test satellites.

Now the company is preparing to launch the Starlink project in earnest. This first group of 60 consists of “production design” spacecraft that are different than the TinTin satellites, according to Musk. However last week during a satellite conference, SpaceX president and COO Gwynne Shotwell noted that these satellites still lack some design features needed for the final constellation, according to a report in Space News. While the satellites will have antennas for communicating with Earth and the capability to maneuver through space, they won’t be able to communicate with one another in orbit, she said.

Shotwell ultimately referred to this batch as “demonstration” satellites, which will test out how the company plans to deploy these vehicles into orbit. On Twitter, Musk noted that the satellites are flat-packed inside the nosecone, or payload fairing, and there is no dispenser for deploying them into orbit. More details will about the mission will be provided on launch day, he said. The flight is currently scheduled for May 15th out of Cape Canaveral, Florida.

Musk also noted that “much will likely go wrong” on this first flight. He argued that at least six more launches of 60 satellites will be needed to provide “minor” internet coverage, while 12 launches will be needed for “moderate” coverage. Shotwell said SpaceX could launch two to six more Starlink missions this year, depending on how this first flight goes, according to Space News. One Twitter user was quick to point out that seven launches would equal 420 satellites, a number that Musk has enjoyed. But based on recent events, the CEO admitted it might not be his lucky number anymore.

SpaceX is just one of many companies eager to launch large constellations of satellites into space, in order to offer global internet coverage. Companies like OneWeb, Telesat, LeoSat, and now Amazon are also working on massive constellations that would provide internet connectivity from low orbits over Earth. OneWeb launched its first six satellites in February of this year. But now SpaceX is poised to gain a significant lead in the race to provide internet from space, though it looks like more hardware upgrades are still needed for future missions.

By Loren Grush, The Verge