Satellite Innovation has become the most important West Coast event for satellite professionals who follow the evolving technologies and market opportunities related to satellites and space.

With roughly 800 attendees, the conference filled the Computer History Museum in Mountain View, California, to overflow capacity. The conference is conducted from October 8 to 10 and featured more than 120 expert speakers with 17 in-depth sessions, three keynote presentations and an exhibition hall with more than 60 participating companies. 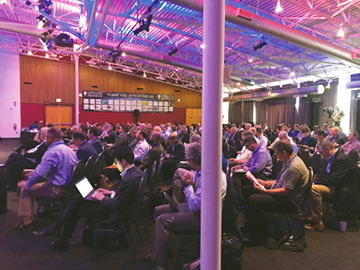 Satellite Innovation attendees during one of the informative sessions. Photo by Wendy Lewis.

Now in its third year, the symposium brought together leaders from government and commercial organizations as well as investment and research firms and covered the gamut from GEO, LEO and Earth Observation (EO) opportunities to the innovations that are driving the industry forward. There was a focus on technology advances such as machine learning, artificial intelligence and the software-defined solutions that are redefining satellite capabilities. The antennas and ground networks that connect satellites to useful applications were discussed as well as the increasing importance of cybersecurity.

As always at this Silicon Valley event, there were discussions about investment strategies and the opportunities for new capital as well as speculation on market growth related to in-flight connectivity, the Internet of Things (IoT) and the start-ups expected to drive the industry into the future. A panel session titled, “Growth Through M&A, Partnerships or New Capital – Evaluating the Path Forward,” included panelists from Boeing HorizonX, Facebook and several venture capital firms as well as investment bankers, were also represented on a panel titled, “What do Capital Markets Need? Successful Financial Strategies,” moderated by Satellite Finance Editor-in-Chief Jason Rainbow. 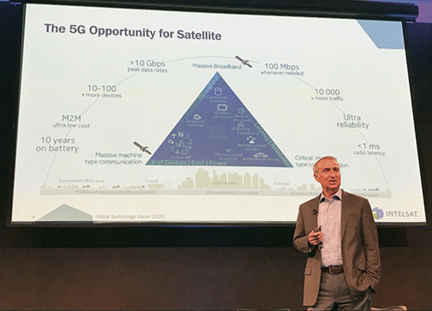 Standardization was an important theme on Day One of the conference. According to Steve Spengler, 5G is not in the future — it is now — and the U.S. is running behind China and South Korea in adopting the new standard. He believes that satellites or a variety of High Altitude Platforms (HAPS) must be part of the 5G solution in order to assure ubiquity and to serve populations that are currently left behind when it comes to high speed communications.

Spengler said that satellite’s challenge has been that it was considered an appendage to the network space and had a reputation of being slow, expensive and complicated. High throughput satellites and increasing capacity are changing this equation and enabling the business case to close in terms of cost, however, he said that complexity is still a major hurdle when it comes to fully integrating satellite into the greater communications infrastructure.

According to Spengler, moving from hardware-based satellite systems to software-based systems will help simplify how satellite is used. He noted that in five years, 70 percent of satellites are expected to be software defined, but we need to do more on standards to assure the simplicity that the consumer experience demands.

He noted, “But we have to do more on the standards side. Suppliers, partners in this ecosystem have to work together on standards… we really have to amplify the effort. Things have to be easier. If we do that, it will foster growth and adoption of our solutions.”

In the second, Day One keynote, Mark Dankberg reiterated the importance of the economics of satellite broadband and noted that it must be self-sustaining. He agreed with Spengler that flexibility to allocate bandwidth is crucial to success. He noted that, while latency is an issue in some applications, that network congestion is far worse and results from not having enough bandwidth where it is needed. 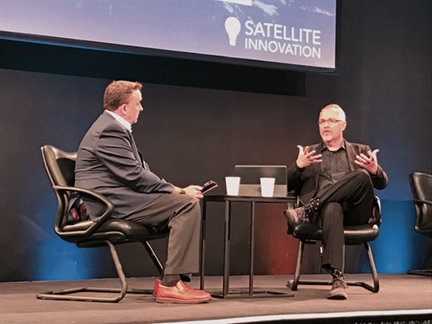 The third keynote of the conference was held on Wednesday morning, the second day of the conference. In conversation with Chris Stott, CEO of Mansat, Dr. Kennedy discussed why he left the Space Development Agency, which was supposed to have the goal of leapfrogging the current DoD space architecture. He stated that now is a time when the U.S. Air Force is very open to new ways of doing business and that now is the time for disruption.

He implied, however, that he wanted to run the Space Development Agency like an innovative start-up, but leadership refused to give him the autonomy and resources needed and he did not get support for leveraging commercial investment in space.

“I’m a big fan of commercial leveraging,” he said. “and I think that the time is right to create a private sector USG partnership to go off and do some pretty incredible things that would benefit DoD, but that wasn’t everybody’s opinion…”

He said we’ve grown complacent over the past 20 to 30 years, with today’s satellites looking nearly the same as ones that were built 20-30 years ago. Kennedy believes that the government needs to bring innovators forward like DARPA did by funding SpaceX’s early launches.

His vision is for proliferated architectures that provide no easy targets for adversaries, and in effect act as a deterrent. He also noted that building thousands and thousands of mass-produced inexpensive “things” is a natural place to speed up innovation. However, he said, “heritage currently remains the name of the game.”

Kennedy also noted that private capital plays a unique role in advancing capabilities, but government needs to take risks by investing in places where private capital doesn’t. He gave the example of how few wish to build low cost optical terminals and this is something that government investment could support.

He commented that the U.S. led the world into the space age but now has begun to lag behind its competitors. He cited ITAR as an example of a policy that may have been counterproductive and lamented that there is too much risk aversion and the U.S. government needs to take strong steps to restructure the process through which space technology is developed and procured.

In addition to the keynotes, there was a broad range of speakers with significant messages. Word among attendees was that the level of quality speakers was exceptional at this conference.

Hughes, which is a leader in satellite broadband, ground terminals and managed networks, had speakers on three different panel sessions. Rick Lober, VP of Defense and Intelligence Systems at Hughes, discussed the implications and ramifications of using space as a warfare domain, and Rajeev Gopal, VP of Advanced Programs, weighed in on next-generation GEO systems.

Additionally, Reza Rasoulian, VP of Broadband Satellite Services at Hughes, formerly with Carnival Cruise Line, discussed next generation mobile systems including maritime services. They all addressed a recurring theme for the conference, which is that no single technology can make up a truly ubiquitous global network and the connected future requires both terrestrial fixed and wireless, and satellite delivery systems. 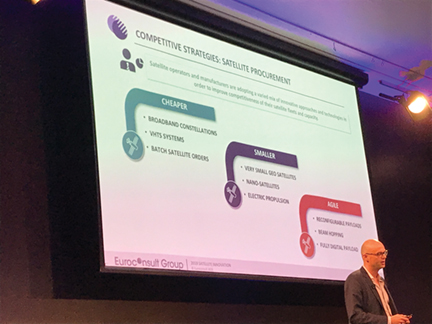 In an interesting divergence from typical satellite conferences, Satellite Innovation included 12 market and technology briefs on topics ranging from launch and constellations to satellite servicing on orbit and phased array antennas. These engaging 15 minute sessions included Nathan de Ruiter, Managing Director of Euroconsult Canada, who discussed today’s landscape of satellites under development. Euroconsult recently released a report which forecasts the satellite communications market will return to growth in 2020 driven by demand for broadband applications including rural connectivity, in-flight communications, as well as cellular backhaul.

De Ruiter said, “Satellite operators and manufacturers are adopting a varied mix of innovative approaches and technologies in order to improve the competitiveness of their satellite fleets and capacity.” He broke the technologies into three categories including cheaper, smaller and more agile.

De Ruiter also moderated a panel discussion on cybersecurity. Speakers included experts from SpeQtral and ID Quantique who explained how advances in quantum computing are both a threat and an advantage to satellite communications. SpeQtral uses quantum key distribution systems for extremely secure communications, based on entangled photons.

David Mitlyng, COO of SpeQtral, said they are the only company outside of China that has demonstrated entangled photon communications on orbit. He said, “Quantum is the next big innovation for security and the technology is mature and ready to deploy.”

How the proposed constellations of Low Earth Orbit (LEO) satellites will impact the industry remains a key question. There were multiple discussions about the potential for OneWeb, Project Kuiper, Starlink, Telesat LEO, LeoSat and others to succeed and speculation on which might merge with others and which might be left on the drawing board.

In addition to the communications satellite mega-constellations, the number of Earth Observation (EO) and remote sensing satellites is also expected to proliferate. The mitigation of space debris also continues to be a concern relative to the number of planned launches and constellations of small satellites. Most of the smallsat companies claim to have viable plans to prevent interference and collisions, but that remains to be seen. The question is whether LEO orbit will become a big traffic jam, like highway 101 was in the morning on the way to the Computer History Museum. 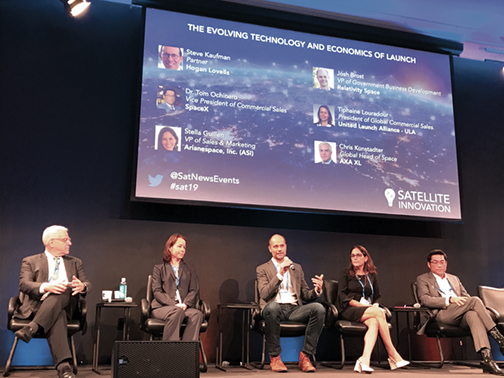 The proliferation of smallsat constellations, both in the U.S and around the world, is driving demand for small launch vehicles. However, there were surprisingly few alternative launch providers on the program, apart from Relativity Space and Spaceflight, Inc., which is a rideshare company and isn’t building its own launch vehicle.

Philip Bracken, Director of Engineering at Spaceflight, Inc. presented a launch systems market brief. He said there are 140 launch vehicles in development globally. The number of available launch vehicles well exceeds projected launches, and she noted that the industry will need to adjust.

Unlike many satellite conferences, the exhibition areas at Satellite Innovation are spread throughout the venue. Exhibitors included many of the essential subsystems and services that make satellite communications possible. There were providers of antennas, electronic components, propulsion systems and satellite network integrators among others discussing and demonstrating their latest advances. With an eye to both the commercial and government markets, both start-up companies and industry veterans participated.

Key to this Silicon Valley conference is the opportunity to network with colleagues, competitors and knowledgeable experts. The conference is large enough to attract key industry leaders but also small enough that everyone is accessible to one another.

Show management put it well, saying, “A continuing, and viable satellite and space environment is highly dependent upon the ability of thought leaders to cement their progressive strategies into new technologies and product offerings. Core to these endeavors are a strong professional network, a deep knowledge of how the satellite industry functions, and insight into what changes lie ahead.”

Satellite Innovation provided an ideal opportunity for this sharing of ideas and building of new relationships. Attendees were gratified to absorb information in conference sessions, to meet with market dominant innovators, and they left with a better idea of the changes they need to implement in their organizations to optimize their position in the rapidly evolving satellite industry.

Wendy Lewis may be contacted at Strategic Voice: wendy@strategic-voice.com