Surrey Satellite Technology Ltd. (SSTL) has shipped a 16 kg. Target satellite for Astroscale’s End-of-Life Services by Astroscale demonstration (ELSA-d) mission to Tokyo, where it will be bolted to the Chaser satellite for environmental testing ahead of the launch in 2020.

The ELSA-d mission is designed to simulate capture of orbital debris and validate key technologies for end-of-life spacecraft retrieval and disposal services. The Target and Chaser satellites will be attached for launch and de-orbit, but while on-orbit at 500 to 600 km., they will be deployed in a series of increasingly complex separation and capture maneuvers using search, identification, rendezvous, docking, and de-orbit technologies. 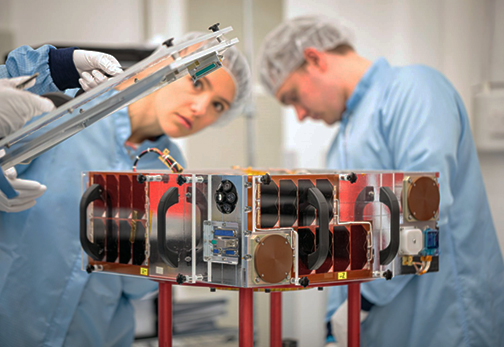 The ELSA-d mission comprises of a Chaser satellite and the Target satellite, and will demonstrate key technologies for orbital debris removal. Photo is courtesy of SSTL.

The ELSA-d Target satellite was designed and manufactured by SSTL in Guildford, UK, and incorporates S-band communications, GPS positioning, and a 3-axis control system. It will also fly an HD camera and lighting to record the capture sequences during eclipse. A ferromagnetic docking plate with optical markers is attached to the Target, allowing the ~180 kg. Chaser satellite to identify and estimate attitude before deploying a capture extension mechanism with a magnetic plate to latch on to the Target satellite.

While rendezvous has been performed on-orbit in the past, ELSA-d will demonstrate the first semi-autonomous capture of a non-responsive, tumbling Target, as well as the first identification of a Target that is outside of the field of view of the relative navigation sensors on the Chaser. Once the demonstration concludes, the linked satellites will be moved to a lower orbit in readiness to re-enter the atmosphere where they will burn up. 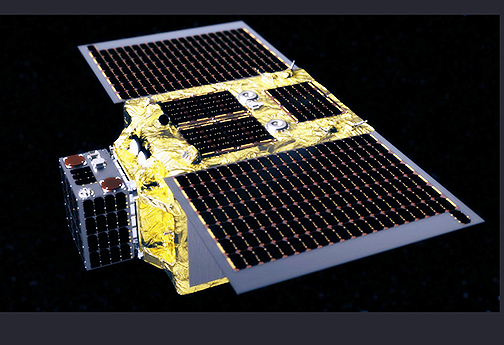 Artistic rendition of the ELSA-d satellite. This mission is Astroscale’s on-orbit demonstration that aims to test several capabilities and technologies needed for future services. Image is courtesy of Astroscale.

ELSA-d is scheduled to launch in 2020 on a Soyuz from the Baikonur Cosmodrome in Kazakhstan.

Sarah Parker, Managing Director of SSTL, said it is vital that the international space community tackles the issue of space junk and the company is pleased to be involved in Astroscale’s ELSA-d inaugural end-of-life spacecraft retrieval demonstration mission. SSTL is looking forward to following the on-orbit operations of this milestone mission.

Nobu Okada, Founder & CEO of Astroscale, added the company is delighted to receive SSTL’s Target satellite at the firm's Tokyo headquarters as the next step is taken in this groundbreaking mission. Astroscale thanks SSTL for the commitment to ELSA-d and for working together to address the ongoing buildup of hazardous space debris in LEO.